This year, I was delighted to be asked back to the HR Expo Africa in Lagos, the theme of which was ‘Employee Engagement’, to run a Masterclass entitled ‘Attract, Recruit & Retain an Engaged Workforce’ as one of the opening speakers.

Even through we have run an Employee Engagement Survey for the last 2 years at Executives in Africa, I have to admit I wasn’t much of a ‘master’ on the subject of Employee Engagement despite my HR Director constantly trying to engage me in conversations on the matter.  I didn’t fancy standing in front of about 100 of Nigeria’s leading HR Professionals without having something new to give them so, I thought it was about time I took the subject seriously.

Everyone knows that if you have an engaged workforce, your employees are:

Scientific evidence from the Journal of Applied Psychology, Vol 87(2), Apr 2002 suggests quite clearly that few things are more critical to an organization’s success than having an engaged workforce.  As a scientist at heart, this made me start taking the subject far more seriously.

Given our focus as a business is on Talent Acquisition, I started mulling over an idea.  I wanted to find out if you can improve Employee Engagement by targeting to recruit people who have a natural propensity to be engaged.

It seemed an obvious solution that if you can work out what behaviours make someone naturally engaged, then companies could just recruit more people who have a natural propensity to be engaged.  The result should be a super engaged work force.

When I cornered my HR Director, despite it being her hot topic of the last two years, she surprised me by being immediately a little defensive about my ‘brilliant’ idea, telling me it was not that simple.  ‘Everything impacts on Employee Engagement – the whole environment is hugely important, how we remunerate people, training and appraisals, our whole EVP, you guys as leaders, how we communicate with each other, having a clearly defined ‘Purpose’ as a company.  It’s hugely complex.’

‘But look at Steve,’ I replied.  ‘He’s hugely engaged.  He’s enthusiastic, keen to learn and share his experience, he’s positive.  Can’t we just work out what it is about Steve as a person that makes him engaged and recruit more people like him, then surely we will have a more engaged workforce?’  As you can imagine, the debate went on…

So, was I right about being able to recruit for an ‘engaged personality’ vs the other areas which affect engagement, broadly bucketed into ‘the Environment’ and ‘Leadership’?  To what extent can we influence engagement levels in our organisations by recruiting for people who have a propensity to be engaged and to what extent are other factors such as the environment we create around them, and our leadership teams influencing factors on engagement? 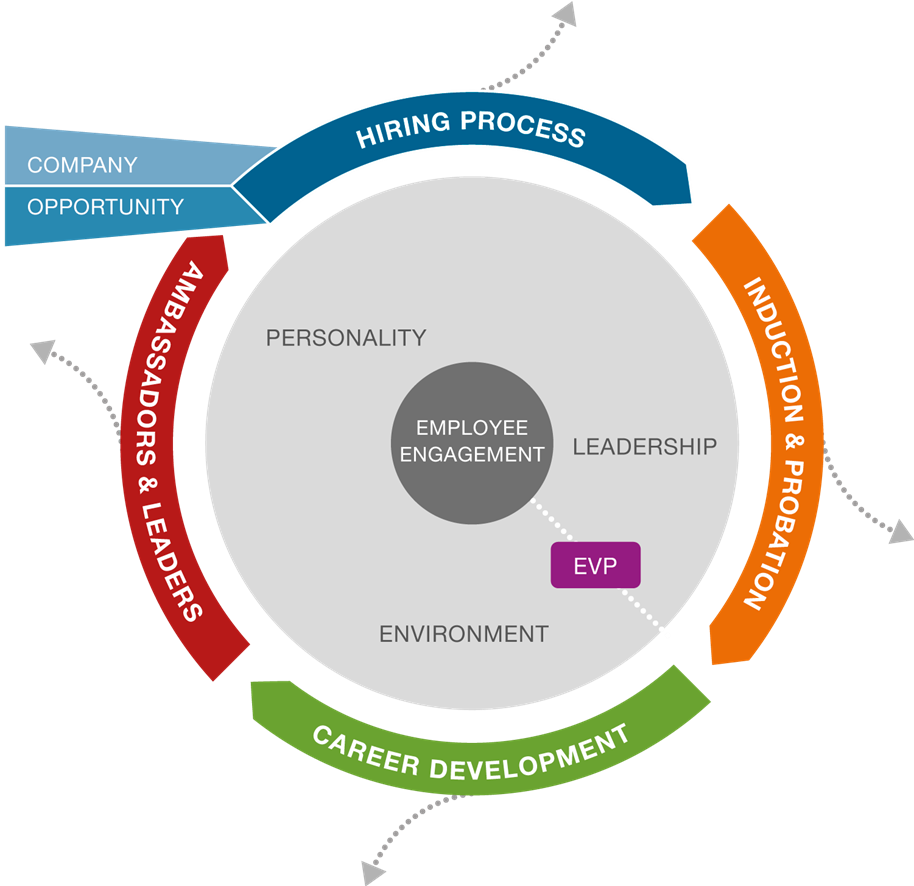 Even before we all started talking about the need to “engage employees,” we have generally all considered being ‘self-motivated’ as something individuals brought with them to work — a characteristic of people we want to hire.  Part of their personality.

Indeed, most of you will already have ‘self-motivated’ as a common personality trait you look for.  We know that two individuals can have very different levels of engagement even when their job situation is nearly identical.  We also know there is demand for employees who display consistent levels of ambition, energy, and dedication, irrespective of the situation they are in.

So how much of employee engagement is actually down to personality?

Macey and Schneider1 tell us that organizations need “people who are predisposed to be engaged”, and back in 2011, Christian et al.2 more specifically showed that employee engagement was strongly correlated with three predisposed traits:

I admit I had to look up the definition of ‘positive affectivity’ to understand what it actually was:

Positive Affectivity is a human characteristic that describes how much people experience positive affects (sensations, emotions, sentiments…); and as a consequence, how they interact with others and with their surroundings.   People with high positive affectivity are typically enthusiastic, energetic, confident, active, and alert, have healthier coping styles, more positive self-qualities, and are more goal oriented.   Positive affectivity also promotes an open-minded attitude, sociability, and helpfulness.

These are all characteristics we naturally look for, but again, I liked that it has been scientifically proven that these personality traits are strongly correlated to how employee engagement levels.  Then I found another interesting paper,3 published in 2018 in the Journal of Organisational Behaviour which really caught my attention;

This paper set out to answer the question: ‘What personality traits are most likely to predispose employees to engage at work?’  Here are the high-level findings;

‘Our meta‐analysis is the most comprehensive treatment to‐date on the relationship between personality traits and employee engagement, the results of which suggest that personality explains a substantial portion of variance in engagement.

In particular, our work reveals that positive affectivity is by far the most important dispositional predictor of engagement.

Proactive personality, conscientiousness, and extraversion were the next strongest predictors of employee engagement, although each of these traits explained substantially less variance than positive affectivity.

Our results suggest that the utilization of personality assessments can help identify employees who manage, direct, and replenish their energy effectively at work and, in turn, become engaged.’

This recent study suggests that hiring people with right personality will boost your engagement levels.  Easy?

While this may look like a straight forward answer and an attractive position to take for managers, I did have some further questions when I reflected on what works well within our own company.

If leaders turn employee optimism and enthusiasm into a key hiring criterion, then surely it becomes much harder to spot and fix leadership or cultural issues because you don’t have the feedback signals?  Surrounding yourself with people who are more likely to give you positive and optimistic feedback does not actually make you more competent at your job.  Frustrated employees are often a warning sign of broader managerial and leadership issues which need to be addressed.

It is a bit like a restaurant owner saying: “Instead of serving better food, or improving the service, I will boost my TripAdvisor reviews by bringing in diners who are less likely to complain, who will look for the positive in their experience!”   While that may boost customers satisfaction ratings, it will certainly not raise the quality of the restaurant.

The most creative people in your organization are probably more cynical, sceptical and harder to please than the rest.  Indeed, many innovators also have problems with authority and a predisposition to challenge the status quo.

Anything of value is typically the result of team rather than individual performance, and great teams are not made of people who are identical to each other, but of individuals who complement each other.

So, if you want cognitive diversity within your teams — variety in thinking, feeling, and acting — then you will also need a team of people with different personalities.  That means combinations of personalities to fit a variety of team roles, having some individuals who are naturally proactive, extroverted, and positive, working together with some who are maybe the exact opposite.

And clearly if engagement is your goal, then you need to consider how you balance these.

So, what is it that affects Employee Engagement the most?  Leadership?  Environment?  Personality?

Kiera was certainly right to some degree.  It’s certainly not simple.  Even though we have identified that you can hire for specific personality traits which will have a positive impact on engagement, equally you need to take a holistic view, ensure you have variety in your teams, as well as creating the right environment and having leaders who are delivering key engagement strategies. 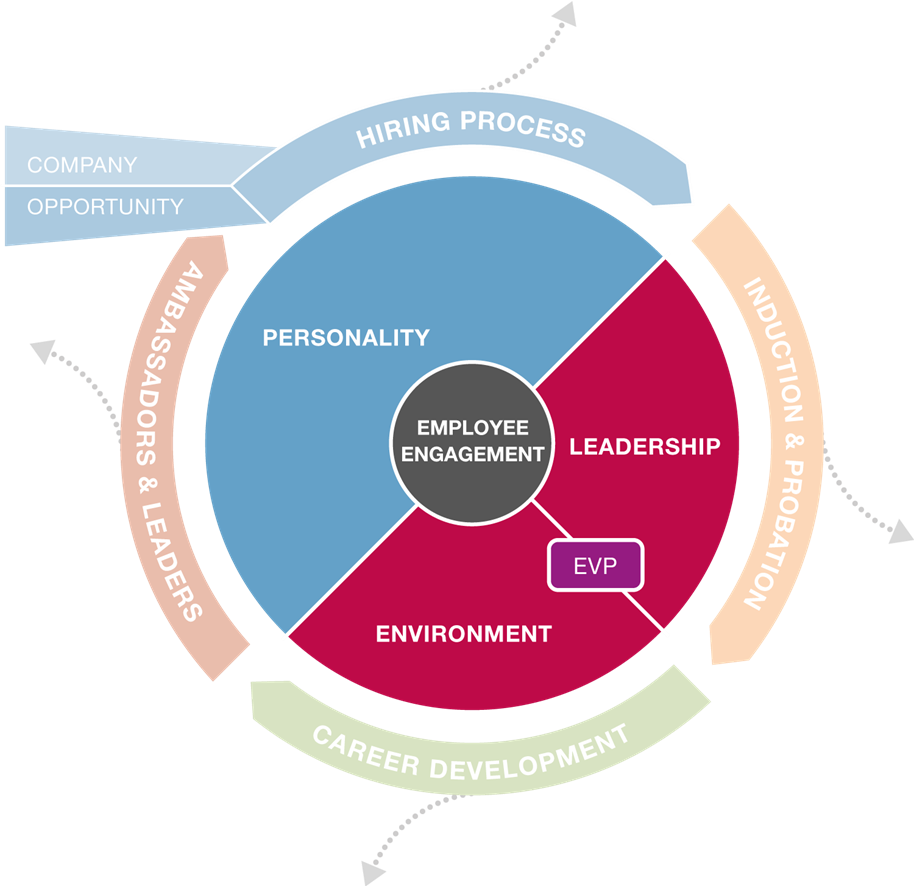 The research in 2018 found that personality accounts for a nearly 50% variance in engagement levels.  It is therefore, a key factor to consider if you want to hire an engaged workforce, and one of the most consistent and reliable ways to understand true personality, is through the use of a specifically designed personality test which is supported by this study.

Indeed, the use of personality testing can be particularly helpful in hiring an engaged workforce for lower level roles in your company.  I am not sure, however, that technology can ever replace the human ability to assess candidates at the leadership level where we are focused, where the OVERALL FIT to a position, leads to a successful hire; understanding not just responsibilities on a CV and their personality from an online test, also;

The Search Process we go through at Executives in Africa enables us to understand the holistic business needs for a key leadership role, not just match a list of responsibilities and skills to a CV through AI and matching the results of a personality test to a required profile.

Yes, we use Personality Testing, but we use it early in the Assessment process.  The complexity of human behaviour and overall FIT is not an exact science, and anyway, we need variety in our teams, especially in our leadership teams.

So, to ‘Attract, Recruit & Retain an Engaged Workforce’, what can you do?

Take a holistic approach.  Use Personality Assessments to help you recruit an engaged workforce especially for lower level and professional level hires, because there is scientific evidence to support personality having a major impact on this.

But don’t rely on it, be open minded, and use experienced Recruiters (either internal or external) for key senior management hires where you need to assess something more intangible, in order to get a balanced ‘OVERALL FIT’.

If you would like to discuss this subject in more detail, please contact Sarah Fitzgerald, Managing Director, at sf@executivesinafrica.com